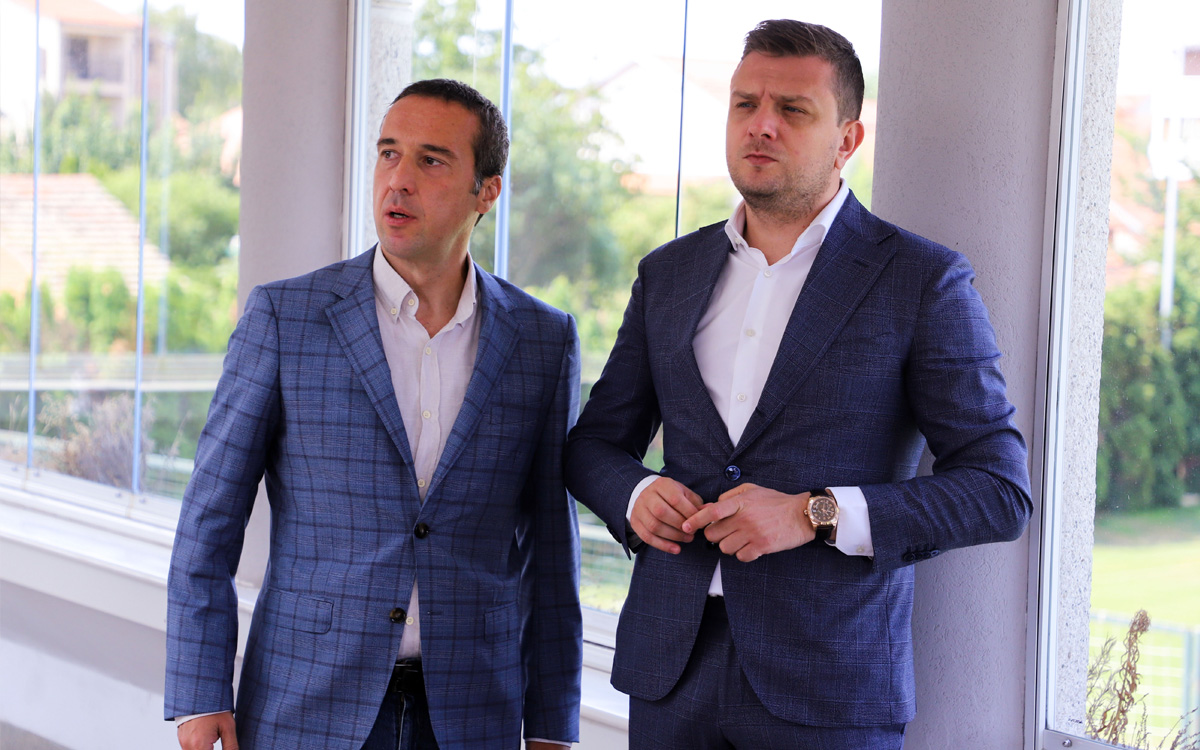 “Transfer window has practically just started but we are closing it down gradually as we signed three players we need and believe these are really good signings, especially after their pre-season, Reports from Head Coach Aleksandar Stanojevic and Chief Scout Ivica Kralj are positive, starting from Sinisa Sanicanin who blended in really well. As for Ricardo, we wanted to sign foreign player who played for Partizan. We worked on his transfer since January. It wasn`t easy but we managed to bring him over. Every foreign player needs several months to accustom but Ricardo lived in Belgrade before and he knows how Partizan works. According to above-mentioned reports, he looked like he was never away from us. Pantic looks good, too. He was my desire, I wanted him signed and he knows what we talked about in the last three years. Pantic is different when he is our player, last time around he was here on loan from Chelsea. I expect a lot from him”, said Milos Vazura.

“Domestic championship will be long but we need to battle for the title. We also have to fight to win the cup and to secure Conference League group stage as we didn`t play much European games last season. It important to remain part of international scene and to be competitive for the title locally”.

What`s the story with Matic and Gigic? They are not in contention nor did they take part in pre-season. They train with the team though.

“They are Partizan players. We work on sending number of players out on loan and some might end up singing for other clubs. Some of them already departed. We have to reduce our budget and we cannot withstand the pressure of holding onto players who are not even in contention for the bench. We have to reduce our roster and we did a lot in that department so far. We`ll keep doing our best to find another club for players who failed to impress or send them out on loan somewhere where they can show more”.

Players like Scekic, Zdjelar or Markovic are rumoured to have received offers from abroad?

“There are different offers around but nothing that serious to be considered. It`s all rumours, basically. Macky Bagnack was the only player who had a clear offer and he departed. It seems that summer transfer window just kicks-off around the world and we expect some offers for our players. So far, it`s all chit-chat and I cannot take it seriously in this business”.

Youngster Mateja Djordjevic signed professional contract. What`s going on with the rest of the young guns who took part in Slovenia pre-season camp?

“They all remain part of our squad – Milovanovic, Bazdar, Subotic…I`m happy about it, they are future of Partizan along already established Jovic. I`m glad Jovic is there after we had Strahinja Pavlovic or Filip Stevanovic as our wunderkinds previously. This is a proof our youth academy does quality work, they constantly produce talent for senior team and it`s not that we force these kids into senior world, they are worthy of our team. Jovic was excellent during pre-season and Milovanovic was our top scorer in Slovenia while there`s interest from number of big clubs regarding Bazdar”.

“It`s just talks. Many clubs asked about Bazdar but we are far from any kind of agreement. He needs to play for Partizan first. When he proves here, he`ll make a deal with a big club with ease”.

Soumah is up for sale? What`s the fee Partizan expects from his transfer?

“I don`t like to talk like that. We are waiting, negotiating and lot of it has to do with Soumah`s desires. He`s been in Partizan for a long time now and we`ll do everything possible for both parties to be satisfied. Soumah is here and he`ll play as long as there are no suitable offers. It`s nothing bad about it. If there`s no suitable enough offers, he`ll stay here. No one says Soumah has to leave. Unfortunately, he missed our pre-season as his passport was stolen back home and he waited for too long for visa permit to enter Slovenia. It was a big handicap both for Soumah and for the team. It`s a stupid thing to happen, but it did happen”.

“You need to ask Stanojevic. I think I know what`s on his mind but that`s not my department really. Coach has his stance and we absolutely respect his decisions”.

“Unfortunately, we are negotiating contract termination with Bahebeck”.

“It`s not great but wages are there on regular basis. I don`t think any club in the world can boast about good finances. We had transfer of Filip Stevanovic to Man City last winter and number of other transfer jobs in the past. We expect us to remain solid in financial department and we know we`ll achieve more fine transfers. Moreover, we hope to play European competiton as long as possible”.

Some players here have quite good contracts, as if they are playing in Spain, for example.

“That`s right. We talk about reducing some contracts but let`s slow down a bit. We cannot talk about it with every single player, some of them are not getting as much and some of them deserve every penny. But, we are moving in that direction, in all depends on our transfer politics. We are looking to sign another player but we are not rushing things and we don`t want to make a mistake. Departures are tied to offers. It`s not about what we want but about what we have as options. If you look back, you`ll see that we had positive departures over the last five years, financially. We hope for more, despite tough days around and the fact that loans are more common than buys these days.  We expect Sadiq`s transfer, that`s where Partizan has a good percentage lying in. We don`t need to sell as we have players around Europe tied to percentage, Milenkovic, Vlahovic, Mitrovic…They don`t need change federation, there`s different rule now, they can remain in the country they play in and we are still in it, three percent per each player. For example, if Vlahovic strikes 60 million Euros deal, Partizan will get 1,8 mil Euros.

What`s the full story behind Partizan and Sadiq`s transfer from Almeria elsewhere?

“Almeria was obligated to buy-off 30% of us for 3 mil Euros only if they reach Primera. Now, they can buy it whenever they want, for the same amount. The remaining 10% is there when you deduct what Spaniards already paid for. We are in touch. Sadiq has several offers and I believe Partizan will get at least around 4 mil Euros once and if the deal happens”.

What about keeper Stojkovic? Is there an offer from Saudi Arabia or he is going to extend his contract that expires next winter?

“He is our skipper, part of our family. We built a great relationship and it`s going to be easy to make an agreement with him. I read in the papers there`s offer but we are not thinking about it. He`ll be between the posts on Saturday. Trust me, there`ll be no problem with Stojkovic at all”, said Partizan General Director Milos Vazura.