Down the memory lane: 1966 European Cup 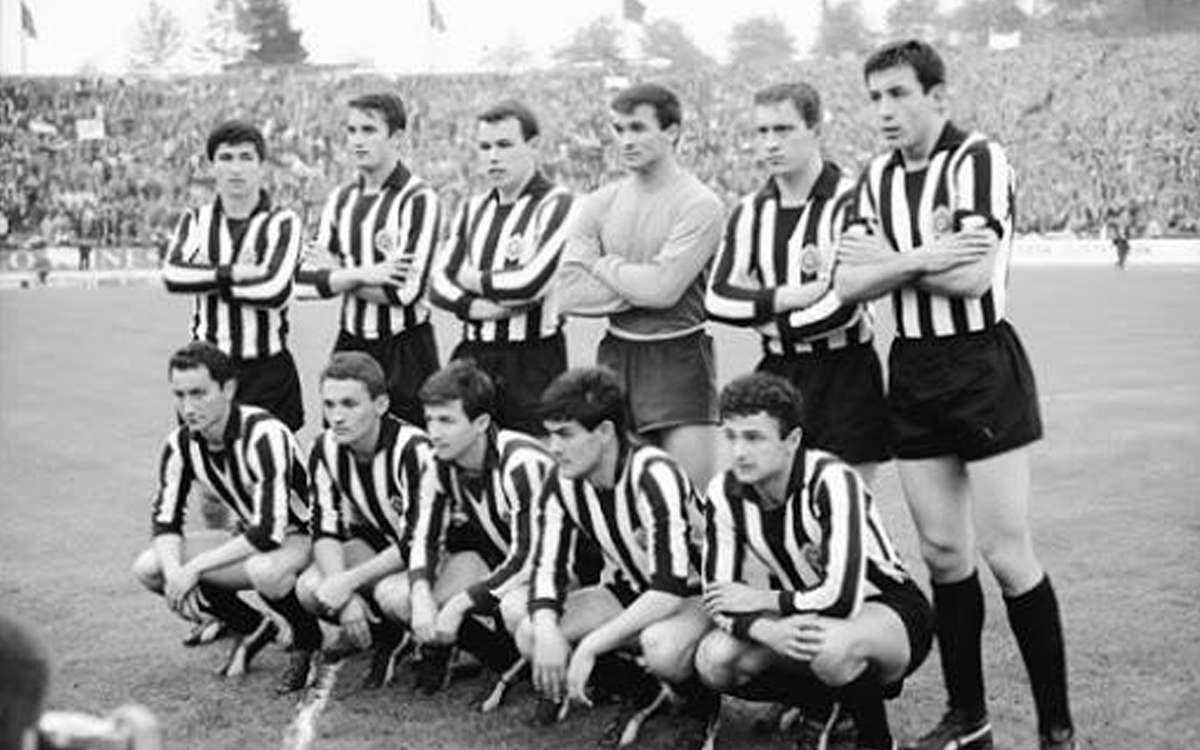 “We were satisfied with reaching the final itself, allowed ourselves to lose focus and failed to become Champions of Europe eventually, although we were so close and deserved to win the trophy so fiercely”.

These words coming from legendary Partizan keeper Ivan Curkovic are a short summary of brightest FK Partizan season over a 75-year old history of the club. Instead of winning a European Cup trophy, Partizan received lots of praise and telegram messages from those who thought our club was better side than Real Madrid on that 11th of May 1966 Brussels evening.

-Few days ago, after we won Cukaricki, I met with my friends in a restaurant and we talked about that final among other things. Simply, 55 years after that phenomenal season of ours, I cannot make peace with myself how we managed to lose our lead and failed to win European Cup, says Honorary FK Partizan President Ivan Curkovic, reserve Partizan goalkeeper on that faithful Brussels night.

It all started in Autumn 1965 –  22nd of September, to be more precise. Partizan won FC Nantes 2-0 at home in a first leg of EC Round of 32 game and successfully glided through the competition eliminating mighty Man UTD in a competition`s semi, to reach the final after a 2-0 home win and 20th of April 1966 1-0 defeat at Old Trafford.

Actually, Partizan played first ever European Cup game in a competition`s history back in 1955 and 11 years later our club got the opportunity to battle for the trophy against 5-time winners already,  Real Madrid. Euphoria was huge, expectations high, quality of Partizan team exceptional, but something was missing – a bit of luck, possible unreadiness to handle the pressure or so-called football audacity, so uncharacteristic of full-back Velibor Vasovic who didn`t want to foul the opponent prior to the Madrigals equalizer.

-Who do you think I am? I`m not going to embarrass myself in front of whole of Europe, I`m a gentleman, not a thug who makes ugly fouls, said legendary Velibor Vasovic when asked why he didn`t foul Amancio Amaro prior to his equalizer, showing that football was significantly different game back in the day.

But, it would be unfair and unjust to believe trophy left for Madrid due to such attitude from Vasovic, bottom line is explained by Ivan Curkovic:

“We were definitely not ready for the final. We felt so comfortable and that was never supposed to happen. I`ll give you one example – at the time most of us had football boots made by our shoemaker Ilija but prior to the final we were approached by representatives from one of the great sports equipment brands and they asked us to add their logo to our boots. Managers were all over us too and our focus was not on the game itself as it was days before. We eliminated Nantes, Werder, Sparta Prague and might Man United, we could have won Real Madrid too, if we just had more focus”.

To add to pre-match euphoria, coach Abdulah Gegic`s son was born night before the final. Actually, Gegic`s son name is Brussels, as a memory of that unforgettable night in Belgium when Yugoslav/Serbian/Eastern European football was close to win first European club title.

Years and up and 55 years later, everyone still remembers that historic final while the actual participants have a slightly different look back at it:

“It`s always nice when we mark that day, regardless of the defeat suffered. But, we did show how great we are as the whole of Europe admired us. However, we all find it a bit hard on each 11th of May as there`s fewer of us around, given our age. Also, some of us don`t reside in Serbia. Nonetheless, those of us who are still around do see each other. Actually, I`m going to have a lunch with Bora Milutinovic today and we will evoke memories of that day when we both sat in the dugout”, says Ivan Curkovic.